This camera was my grandmother’s camera, purchased new around 1939 or 1940. It’s a folding camera of the type that used to be very popular, with a lens, aperture, and shutter assembly on the end of a leather bellows. When not in use, the entire thing folds into the body and is compact enough to fit in your coat pocket. A spring-loaded viewfinder flips out from the top (or the side if holding it vertically). The camera has two shutter settings “instant” (which is about 1/30 s) and “time”. In time mode the release button or cable is tripped once to open the shutter and a second time to close it. The only exposure control is by changing the aperture setting. In it’s day it was a fairly cheap camera sold to casual non-professionals, much like today’s point-and-shoots. My mom dug this out one day and gave it to me, complete with original box and instruction manual, and told me to “do something with it”. 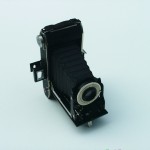 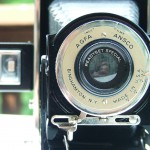 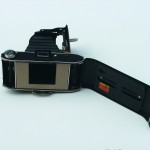 With these old cameras, the part that usually fails is the leather bellows, which can dry rot and get light leaks in the corners of the folds. Fortunately, this one is in good shape. Unfortunately, the camera was built to take 116 size roll film, which nobody makes anymore. Modern 120 roll film comes on a shorter spool, so to use it I had to built a wooden spacer, visible in the right rear of the photo. This allows a 120 roll to be used, but the old metal 116 take-up reel has to be used on the left, so when a roll is finished, the whole thing has to be opened in complete darkness and re-rolled onto the supply reel. I have done this in the field with a changing bag, but it’s generally more trouble than it’s worth. If I am using the camera, I just load one roll and that’s it for the whole day. I also made a cardboard mask for it so it works better with the narrower 120 film.

Since I purchased my Autocord, I don’t risk this cranky family heirloom anymore by taking it to places where it might be dropped or damaged, so it’s pretty much in retirement now. I occasionally run a  roll of film through it, though, because I believe cameras are for taking pictures. Some of those pictures you’ll find on this website.