Experimenting is an important part of photography. I love being able to manipulate the photo to create a unique image, even to the point of manipulating the light before it has even been recorded on the film. I developed and constructed a simple slit scan rig in order to have more control over which light gets recorded and when.

The concept of slit scan photography is very simple: The camera looks into a darkened box. The opposite wall of the box is a moving wall with a narrow slit in it. As the wall the moves over time, the slit scans light from the subject onto the film continuously, so that light from one side of the image is recorded several seconds before light from the other end. Any motion of the subject or camera relative to each other will result in a distorted image. The photographer can plan ahead and deliberately use this phenomenon to good effect.

This device was made from hobby wood, parts from Radio Shack, and a small motorized gearbox from a hobby shop. The camera is attached to the back of the box by screwing the lens onto a Cokin filter ring, which is permanently bolted onto the box. The moving slit wall is pre-positioned to begin the scan, the camera shutter is locked open, and the scan begins. Control of the scan is via the use of the switches on the panel, which include direction, speed, and on/off. A 1/4″ mono jack allows the use of a remote cable switch. The entire box can be mounted on a tripod or handheld. 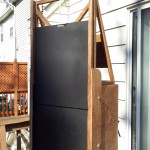 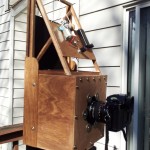 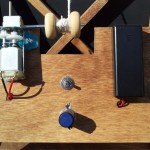 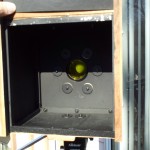